Which of these deserts got its name from a word meaning desert? Namib Desert, Chihuahuan Desert, Sahara Desert or Kalahari Desert. In Arabic, the word Sahara means desert.
Outside of Antarctica in the Artic, the Sahara is the biggest warm weather desert on the planet. It's about the size of the United States and there's debate in the scientific community about whether the Sahara is growing. Some experts say the desert has expanded over the past 100 years by as much as 10 percent. Others say its area naturally fluctuates depending on the amount of rainfall at its borders and that a drought in the late 20th century only made it look like the Sahara had grown. 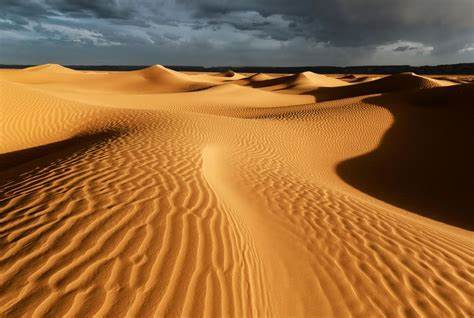 There's also debate over whether the Great Green Wall, a massive tree planting project across North Africa has been working. It's progress since 2007 has been slow and critics say that natural weather patterns and bad farming practices are more to blame for desertification than the Sahara itself. Regardless of what's happening with the desert though, the Great Green Wall Project continues to grow. It received $14 million in funding earlier this year to continue its efforts.