And now, Words and Their Stories, from VOA Learning English.

Today, we are going to talk about the idea of community and neighborhoods.

Where we live can make a difference in our happiness. Some people love their neighborhoods just the way they are. They do not want them to change.

For example, let's say a city council decides that they want to build a big waste treatment plant into a quiet, beautiful neighborhood.

A waste treatment plant would be loud. It would bring lots of big trucks through the neighborhood streets. And it would probably smell bad.

All these things could lower the quality of living and the property value of the neighborhood's houses.

So, people in the neighborhood hold protests.

They collect signatures to show the city council that the neighbors do not want the waste treatment plant in their neighborhood.

They know the plant is necessary. But they want it built somewhere else – not near their homes.

And that brings us to our word for today: NIMBY.

NIMBY is an acronym. It stands for: Not In My Backyard.

Usually the word "backyard" means the area behind a house. But in this case, it means the whole neighborhood.

If you look it up on the internet, NIMBY describes an opposition to putting something considered undesirable in one's own neighborhood.

When describing a person, a NIMBY is someone who opposes some form of new development in their community or neighborhood. Their way of thinking is sometimes called NIMBYism.

Now, our first example was a waste treatment plant. But many other facilities can bring out a person's inner NIMBY -- for example, prisons. 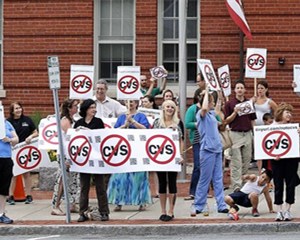 They may be necessary, but they are not desirable to some people. Some may think that they could bring unwanted problems to their neighborhood, like crime.

But a person may be a NIMBY to other kinds of development too – like big stores or sports stadiums.

They may bring business to a city, but they also bring more traffic and noise to the neighborhood they're in.

For example, let's say a brand-new food store is coming to your neighborhood. You are very happy.

Finally, you won't have to go far to buy food! But some of your neighbors do not share your happiness.

They fear the new store will bring many more people, many more cars, and big trucks to their quiet streets. They may not be able to park their cars easily.

So, they try to stop the development from happening.

Maybe we all have a little NIMBY in us. Maybe we do not know it until our city wants to build a trash processor next to our home.

A: Hey did you hear? They city council is voting on the new trash treatment facility tomorrow.

B: I know. And I will be there with about 50 neighbors to protest.

A: Oh, are they thinking of building it in your neighborhood?

B: Yes. And it just doesn't make sense!

A: Are you sure this isn't just a NIMBY reaction?

B: Maybe a little. But it really WOULD be cheaper to build it in another part of town.

A: And what part of town would that be?

B: Near the railroad tracks. Nobody lives around it. Plus, that location already has an old trash treatment plant. That will save a ton of money.

A: Those are actually pretty good reasons.

B: Yeah, I figured if we didn't bring some good reasons to the fight ... we would just sound like big NIMBYs.

B: I can live with that.

And that's all the time we have for this Words and Their Stories. Until next time...I'm Anna Matteo.