JUDY WOODRUFF: President Biden plans to announce tomorrow that all 2,500 U.S. troops in Afghanistan will leave by September 11. The "NewsHour" confirmed the decision today. It is four months later than the previous deadline. Top Republicans immediately criticized the move. Senate Minority Leader Mitch McConnell called it -- quote -- "a grave mistake." Here with some background on the decision, our Amna Nawaz. So Amna, fill us in on with what we know about this decision.

AMNA NAWAZ: Judy it's a huge announcement from the White House in America longest war. As you mentioned President Biden now plans to begin withdrawing U.S. troops from Afghanistan starting next month with an eye to having all U.S. troops out by September 11 of this year. Now, we should point out the Biden administration, essentially inherited a exit plan from the Trump administration. That was a deal negotiated with the Taliban last year. The Taliban basically said, we will stop attacking U.S. troops. We will cut ties with Al Qaeda, and the U.S. said we will have everyone out by May 1. Now, President Biden came in and said that deadline was going to be very hard to meet. There is anywhere from 2,500 to 3,500 U.S. troops still on the ground right now in Afghanistan that number does fluctuate a bit, that's why the Biden administration was working to develop their own plan. Now we do expect more details tomorrow, but for now this is a very big announcement. This is 20 years after the attacks that lead the U.S. that war in the first place. Trillions of dollars later, more than 2,000 U.S. troops dead, over 100,000 Afghan civilians dead, and Judy now we know that the U.S. says it will be done fighting this fall. 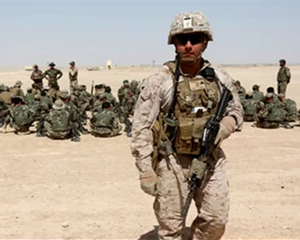 JUDY WOODRUFF: And Amna, we know when this war began, there was broad bipartisan support for the United States going in. Tell us more about the what the reaction has been this afternoon.

AMNA NAWAZ: Yeah, Judy you mentioned some of it, like Mitch McConnell, criticizing the plan, calling it a grave mistake. Others, like Chuck Schumer, have said, they want to be briefed on exit, their going to wait and have some more details, but some, like Senator Tim Kaine have basically said, 'we support this plan because it's time, it's been long enough and it's time for the U.S. to leave. And one White House senior official who briefed some reporters today basically said the same argument, that the mission in Afghanistan was twofold, one, deliver justice for 9/11, and, two, disrupt the terror networks there. And, Osama bin Laden is dead, and the Al-Qaeda threat, and the threat to the U.S., is largely gone. We should point out the threat has not gone away, when you look at the Taliban today they are stronger than ever. They have been resurgent since the drawdown of peak U.S. forces in 2011, and today they control or contest more more territory across Afghanistan than at any other time in recent history. And that is why the U.S. is negotiating with them about an exit plan, and not with Afghan President Ashraf Ghani. Now we should say that the Taliban have stopped attacking U.S. forces but they are attacking more Afghan forces and more Afghan civilians. So there has been and increase in violence. The concern is they're poised now to take over once again. So, Judy, when the U.S. troops leave, when the last of those U.S. troops leave Afghanistan by September 11th of this year, as President Biden said, they'll essentially be handing the keys right back over to the same forces that they have been fighting for the last 20 years -- Judy.

JUDY WOODRUFF: A lot of concern, we'll be watching for the President's announcement tomorrow, and then of course watching to see what happens between now and September and after. Amna Nawaz, thank you very much.